At the beginning of 2021, the epidemic in Southern California, the economy is in recession and many industries are in crisis, but the "stall economy" is growing against the trend. A number of wholesalers in Los Angeles had turned to stalls during the New Year, and business was good, with businessmen exclaiming "beyond imagination". Long time stall Chinese in Los Angeles recalled that the heyday of the Southern California stall economy was the late 1990s to about 2004, when Los Angeles, Long Beach, Pasadena, Ventura and other places have a large stall market, campus stalls, city fairs, farmers' markets and large events and other unclassed stall economy is booming. At that time, there was a big flea market between Rosemead 10 and Highway 60, where Mexicans, Vietnamese, Chinese, etc. operated.

Choosing the right tent for your stall

We all know that a stall needs a sturdy booth for support. There are some food businesses, such as, for example, barbecue stalls, that need to provide space for tables and chairs for guests to eat. Then it's necessary to find a sturdy, cost-effective tent. "The easiest stall to go to was the flea market, which had the lowest barrier to entry, but was relatively fixed, with many people staging in the same stall for more than 10, 20 years or even a lifetime. Some cities will open markets and farmers' markets on Thursdays and Fridays, which are not only the places where local residents gather every week, but also the resources for the survival of the stall economy. The biggest difference between flea markets, city markets and farmer's markets is that low-grade stalls usually have no theme, no one cares what they sell at flea markets, how they sell, whether the goods are new or old, and even if you can't pay the rent for the stall, you won't necessarily be kicked out. He had seen countless times that vendors who did not pay the rent put their cars in the parking lot and enter the flea market on foot, carrying the goods with both hands and shouting while buying and selling.

Setting up a stall in a mid-range market takes some time to do your homework, as each city has its own rules to protect local businesses as well as to prosper the local economy. Vendors wanting to set up a stall have to apply in advance, obtain a merchant's license, and get permission from the local chamber of commerce. Stall fees for street stalls in cities are also usually more expensive than flea markets, generally about 50% higher.

With flea markets starting too low and city markets and farmer's markets not making enough money, many street stall operators are turning to the campuses of universities and community colleges around the world, "which are quite a worthwhile backyard for stalls". To set up a stall on these campuses usually requires the student committee to apply for approval, present their own sales permit, and make a list of what products to buy, and not to form fierce competition with other stalls, so the type of sales and the design of the stall need to submit a plan beforehand. More than a decade ago, the booth fee for a week at the University of Southern California was $200, and at the University of California, Irvine, it was $900 to $1,500. While booth rent was expensive, business was quite good, especially during spring break and graduation season.

"Participating in different themed shows and big festivals is one of our favorites and earns us the most". Convention centers around the world have regular weekly or monthly shows with different themes, such as the NBA and marathon booth rentals can be expensive, sometimes thousands of dollars a day, but the booths still do well as long as they are stocked with the right things Business, such as selling women's sportswear or running shoes, shorts and so on at the marathon, selling sports products at the show can be hitched to sunglasses and so on, are free to combine and control, quite flexible. People who had participated in the Mexican National Day stall in San Diego said they could "make more than $10,000 in two days," but the rent also discouraged many vendors because it was as high as $2,300 for two days. Stall rentals range from a few dozen dollars for a flea market to more than $2,000 for a festival, and vendors' incomes vary widely. Pro-lifers say they are not afraid of high rents, but of wind, rain and bad weather, and naturally no business when guests do not come.

Stall will encounter the risk

Some people said they had encountered paid more than 2,000 U.S. dollars in rent, but encountered a storm, the rent and business all gone, the organizers will not be compensated, because the event is impossible to come back, only to admit their own bad luck. However, this kind of smashing big money and weather gambling situation will rarely encounter.

Some places have high requirements for stall holders and strictly limit the number of stalls for similar products, which is another challenge for vendors. For example, some large events or floor stalls restrict the same type of products to a certain number, and merchants have to declare truthfully all the goods they sell, otherwise they may be restricted from selling in the lighter cases, or they may even be thrown out of the venue in the heavier cases.

The advantages and disadvantages of location allocation will directly lead to different business, such as the same size of the stall, if the corner location, there will be a double-sided flow of people, and crowded in the middle or remote corners of the popularity, naturally and obviously different.

Let customers speak for us

Very nice flags, I decorated my show with them, very nice, I highly recommend buying them!

Very good quality, a great help to us in time. 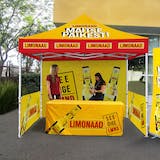 I am very pleased with the receipt of my flags, my feather flags are great for looking to draw attention and foot traffic ！！

I custom a tent made for my new company and shiningshow's price was right for me, they designed a mock up for me for free and I love it. And the customer service is very good, I am very happy to communicate with them.

I recently had a custom tent made at ShiningShow and it was great. I am a BBQ stand owner and I custom made the tent to provide a place for my guests to eat, the tent is very sturdy and my customers rave about it. I provided basic pictures and the designers at ShiningShow came up with a great design for me, I love them so much.